The Vail Interfaith Chapel is the spiritual heart of Vail.  Without it, guests and residents cannot worship any of the six faiths that gather here. It is also the community center for the Town of Vail – a cultural and historical icon use by over 50,000 people annually. After 50+ years of constant use,  improvements are needed to improve the building’s structural and aesthetic integrity.

The Vail Interfaith Chapel and Ministry Building are used for non-religious purposes approximately 60% of the time. 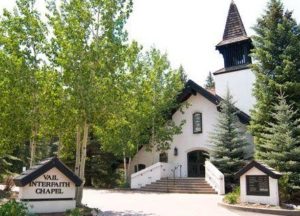 It took a concerted community effort to build the Vail Interfaith Chapel, now 50 years old. It’s going to take a similar effort to keep the chapel vital for the next half-century.

Supporters have launched a $10 million fundraising campaign for the chapel, which includes a lot of immediate work, money for a new roof in a few years and, importantly, a reserve fund.

Katie Campbell, who’s running the campaign, said the reserve fund of $2 million will keep up with maintenance over the next 25 years.

Another $6 million to $7 million will help replace the roof, the current heating system — which is original to the building — and re-pave the parking lot.

The parking lot was re-paved with a snowmelt system during the last renovation in the 1990s. But the snowmelt system failed about seven years ago, and there was no money to replace it. That project will include the parking lot, the walkway and chapel steps. The roof is wooden-shake shingles, and no longer meets town codes. The project also calls for replacing the chapel’s windows, also original to the building.